I’ve just read two more blogs written by people who have joyously gone off the deep end and opted for Sony Alpha 7 mirrorless cameras. In one case it was a “first camera” (nothing like buying a Ferrari for your first car, eh?) and in the other it was to replace older equipment with the usual trumped-up claim about updating/improving. Truth is they wanted a new toy.

I guess people don’t read. Or at least not the right things. Or perhaps they don’t understand what they read. Or maybe they just don’t really think. I’ll bet that’s it. In reality very few photographers have need of something like that Alpha.

This past week in addition to doing silly things with my ‘experiment’ camera that cost less than $400, I talked myself out of buying a Canon M100 that was on sale for around $350. The reasons I wanted it were pretty flimsy: it has a fold-up LCD which could be used as a waist-level finder (someone should incorporate that in a DSLR), it’s 24 MP which would allow great digital zooming, it takes the EF-M lenses which offer additional adaptation possibilities, and it was on sale (I could buy it locally too, with a further discount). 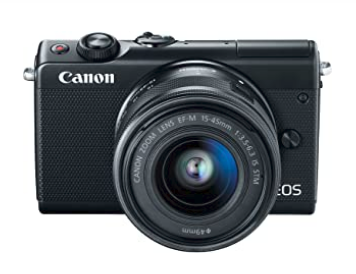 Here’s why I ultimately didn’t buy it: I wouldn’t really take that many waist-level view pictures, the extra digital zooming doesn’t add much especially with a lens that’s only about 3X to begin with (it would be sort of compensating for that), the lens adaptation means needing more adapters even for the lenses I’ve already got (additional expense), and frankly it wouldn’t really add much to my photographic experience. So I let the sale expire.

In truth I’m trying to sell my Nikon W100 right now as that is a camera which doesn’t really work for me. If I can get some money for it I’ll buy a replacement for the ailing Kodak V1003 (which has added short battery life to its other symptoms now), such as a Canon Elph 150 (used). Yeah that’s a 20MP CCD sensor, 10X zoom, small fit-in-your pocket camera which I would use – based on what I already do with the old Kodak.

Now if I were to act like these Sony buyers I’d fork over $1,500 for the Fujifilm X 100F ’cause it looks like a 1950s 35mm rangefinder camera and of course neat looks are what’s really important, right? Sure it’d just sit there on the shelf looking totally retro, but on the other hand after forking over more than the rest of my digital arsenal combined is worth I’d be scared to risk using it in the real world.

Such is the silliness of the heart leading the mind.

Anyway, here’s a nice shot of the half moon taken the other night with the Nikon P610. Which also cost less than $400 new.

This is Fuji’s X-E3. It’s a beauty, eh? Nice ‘retro’ styling like a 35mm rangefinder camera from the 1950s. It also has some pretty impressive technical specifications like a 24MP sensor and being mirrorless (yet having an eye-level finder, albeit an electronic one). And Fuji has a well-deserved reputation for build and image quality. Good all around, right?

Well I like it, but this image is of a “shop worn” “warehouse deal” which even though heavily discounted in price is still twice what I paid for my Canon DSLR! Frankly I’d have a hard time justifying that money even if it were to be my only camera. In fact as such it would be a worse value as it certainly can’t do all the things any one of the four others can manage, much less what they all together can manage. What’s more, this has a single fixed focal length lens: additional lenses mean additional money, to the tune of “more than I paid for my Canon” per each.

Now if I were to go around buying cameras on a basis of how artistic the styling is I’d soon run into two problems: I’d have no room in this house and I’d be broke. No, three problems as I’d probably be divorced as well which would make storing the cameras even more difficult what with being homeless on top of everything else.

In fact you could say I’ve just gotten away from that problem last year with the forced dispersal of my accumulated massive collection of film cameras. That was not so bad as I couldn’t use most of them today anyway, and in fact hadn’t been able to in many years due to the unavailability of film. Digital cameras don’t suffer from that (except in the case of certain early models with proprietary memory systems), but the question “would you use it?” is still valid.

When I look at these shiny toys the only honest answer to that is “no, not a lot”. But I also have to admit that if the price were low enough I’d probably do the stupid thing and buy this one. And possibly some others.

In the meantime I’m waiting for the weather to get better and taking shots like this with the Kodak V1003 which owes me nothing: