We can call it “good news”; my eyes aren’t any worse off than they might be. Near and far focus off a bit more of course, and a very slight indication of cataract in the left. But no indication of retinal problems, and he tested for muscle weakness – which wasn’t present at the time. We did discuss the ocular spasm as well. As with the other symptoms, there’s nothing can be done about it. Hang on – and wait for things to get worse.

My wife is in England trying to straighten out matters with her Alzheimer’s afflicted sister and not having much luck. So much so that she’s having to extend her stay to August. This means she won’t be here when I go to the Big City for my MRI on July 25th. That means I have to arrange dog kenneling again, as well as a motel stay (because the appointment is at night). Never mind the pre-exam blood test which has me drinking plain water all the time trying to get creatinine levels in line (BORING!)

So I haven’t got the assistance of Friend Wife for more weeks, and it’s annoying because it limits my ability to do even simple things on account of not being able to leave the dogs on their own for any long time. As in not even two hours, never mind four hours or overnight for a city trip. Certainly not to spend a day at the cabin working on it.

Ah, yes. The cabin. Dead loss again this year. It needs massive amounts more work and I’m not up to doing it. In fact we’ve lost two months’ work time already, and a third is going to be lost as well. The poor contractor suffered the loss of his wife so he won’t be coming back soon to straighten out the little problems from his work last year. Never mind no one is going to dig the dirt out and put the plumbing in and do all the other things that need doing. Good heavens there’s an entire stove to be installed (no easy task).

The kids would like to come up and stay for a couple of weeks as usual, but unless they bring tents or an RV it isn’t going to happen. At this point even if all was well (and it is far from) there would not be enough time to complete the tasks necessary to make it livable, never mind adding any improvements.

Also, it’s pouring rain. In fact it has been raining quite a lot this Summer. It’s good for keeping wildfires down, but it interferes with work.

And it interferes with play. I have much more I want to do in the photography department, but not with water cascading from the clouds. I haven’t even been able to do some minor outdoor projects lately because of the increased precipitation. I barely managed to mow down the worst of the tall grass here before things got wet. Ironically replacement tires for the ‘good’ mower were dropped off last night (after I’d gone to bed – very weird delivery time if you ask me).

It’s been a bad weekend for pain. The damp seems to make things worse. I’ve had to fire the furnace just to take the edge off, as burning wood isn’t practical: the supply of split is low and I can’t split any more in the rain. Besides which even bringing some in is hard work.

Oddly enough I’ve been reading about the dog food scare where certain types are thought to be connected with canine dilate cardiomyopathy. One of the types is what we feed our now nine-year-old dogs (that’s like 63 for humans). They show none of the symptoms. I, on the other hand, do. But hey four cardiologists have said there’s nothing wrong with me.

So I sit and wait and watch movies and putter around the house and see to the daily needs of the menagerie. And myself. So much to arrange next week too. Thinking of cancelling the MRI because it’s such a hassle and isn’t likely to lead to anything positive no matter what the results are.

I think I need … a lot less happening in my life. 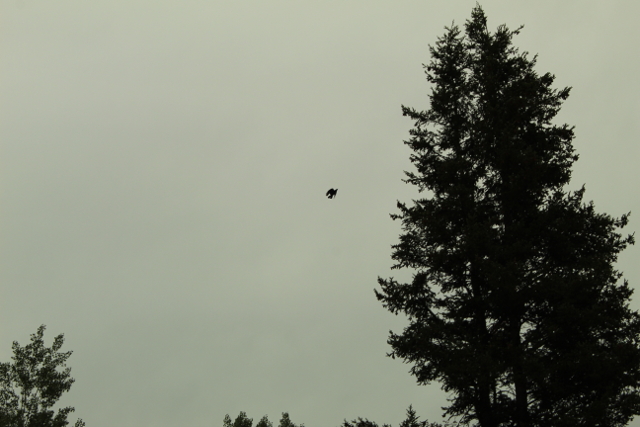 Post Script: after publication I get word my wife will be stuck in England even longer, due to lawyer screw-up and general bureaucratic foot-dragging. The Summer is lost, and nothing is getting better.